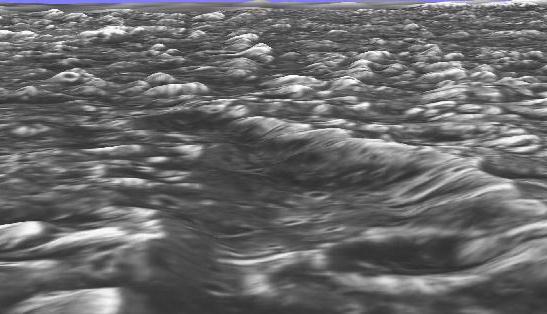 The Hills of Ganymede
Credit: The Galileo Project, NASA

Explanation: This computer generated 3D close-up view of Jupiter's large moon Ganymede was created using image data from NASA's Galileo spacecraft. Simulating stereo vision by combining two recent images recorded from different angles, 3 dimensional information was reconstructed for a section of Ganymede's surface. The result shows the furrows, craters, and hills in the region appropriately known as "Galileo Regio" with a resolution of about 250 feet. Currently exploring the Jovian System, the Galileo spacecraft just completed a flyby of Europa. It is scheduled to return to Ganymede in April next year.