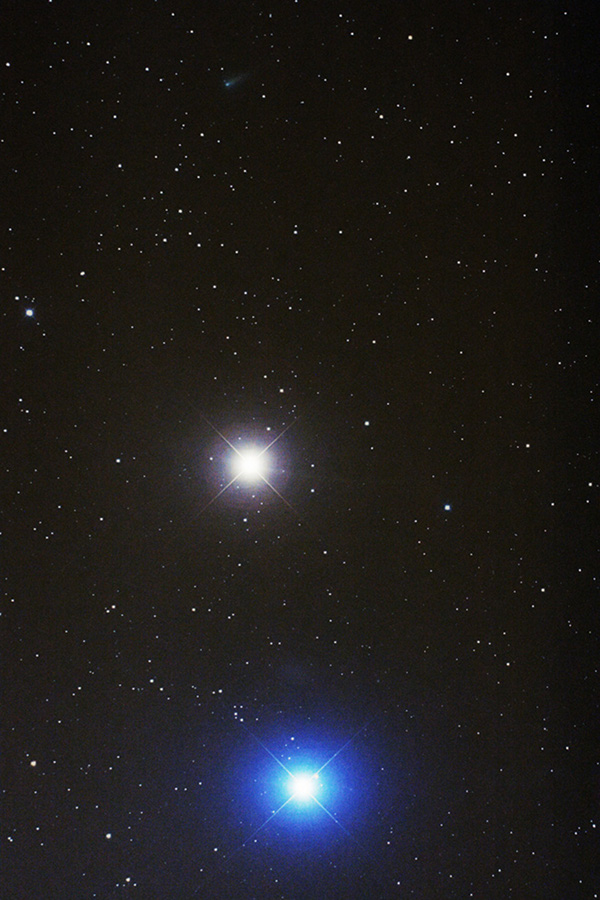 Explanation: In order top to bottom this celestial snapshot features Comet ISON, planet Mars, and Regulus, alpha star of the constellation Leo, in the same frame. The scene spans about 2 degrees near the eastern horizon in early morning skies of October 15. Closest of the three, the much heralded Comet ISON (C/2012 S1) is by far the faintest at 14 light-minutes (1.7 AU) away. Mars is only slightly farther from our fair planet. About 16.5 light minutes (2 AU) away its normal ruddy color is washed out in the exposure. Regulus outshines both comet and planet from a distance of 75 light-years. Just above Regulus, the very faint smudge of light is actually the Leo I dwarf galaxy, 800,000 light-years away and almost lost in the glare of the bluish hued bright star. Comet ISON is expected to grow brighter, though. How bright is still not clear, but not as bright as a Full Moon in night skies. Estimated to be 1 to 4 kilometers in diameter, ISON's nucleus might substantially survive its very close encounter with the Sun on November 28. If so, the comet will climb back above the eastern horizon in planet Earth's northern hemisphere before dawn in early December.