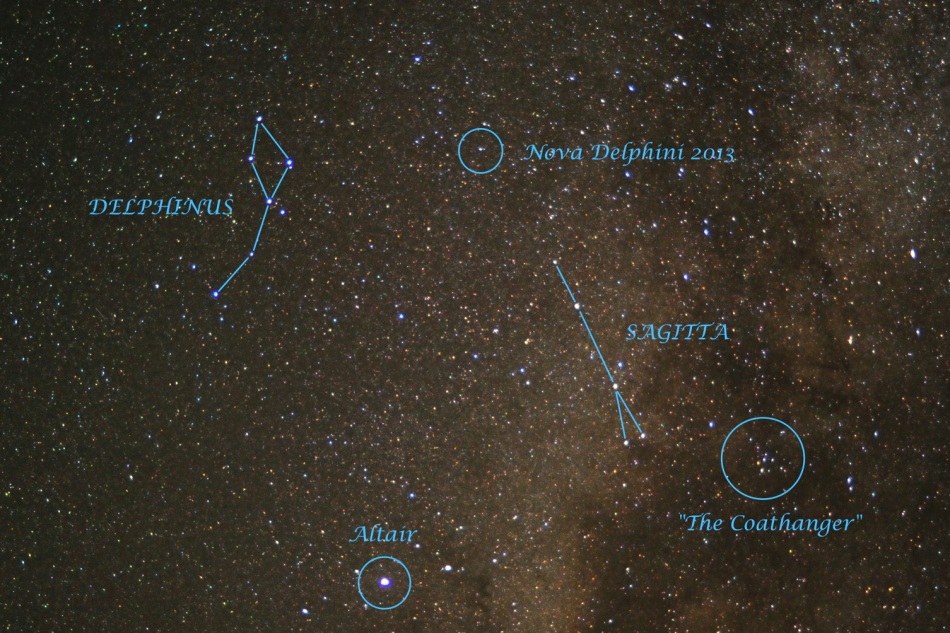 Explanation: Using a small telescope to scan the skies on August 14, Japanese amateur astronomer Koichi Itagaki discovered a "new" star within the boundaries of the constellation Delphinus. Indicated in this skyview captured on August 15 from Stagecoach, Colorado, it is now appropriately designated Nova Delphini 2013. Sagitta, the Arrow, points the way to the newcomer's location high in the evening sky, not far from bright star Altair and the asterism known to northern hemisphere skygazers as the Summer Triangle. The nova is reported to be easy to spot with binoculars, near the limit of naked-eye visibility under dark skies. In fact, previous deep sky charts do show a much fainter known star (about 17th magnitude) at the position of Nova Delphini, indicating this star's apparent brightness suddenly increased over 25,000 times. How does a star undergo such a cataclysmic change? The spectrum of Nova Delphini indicates it is a classical nova, an interacting binary star system in which one star is a dense, hot white dwarf. Material from a cool, giant companion star falls onto the surface of the white dwarf, building up until it triggers a thermonuclear event. The drastic increase in brightness and an expanding shell of debris is the result - but the stars are not destroyed! Classical novae are believed to recur when the flow of material onto the white dwarf resumes and produces another outburst.