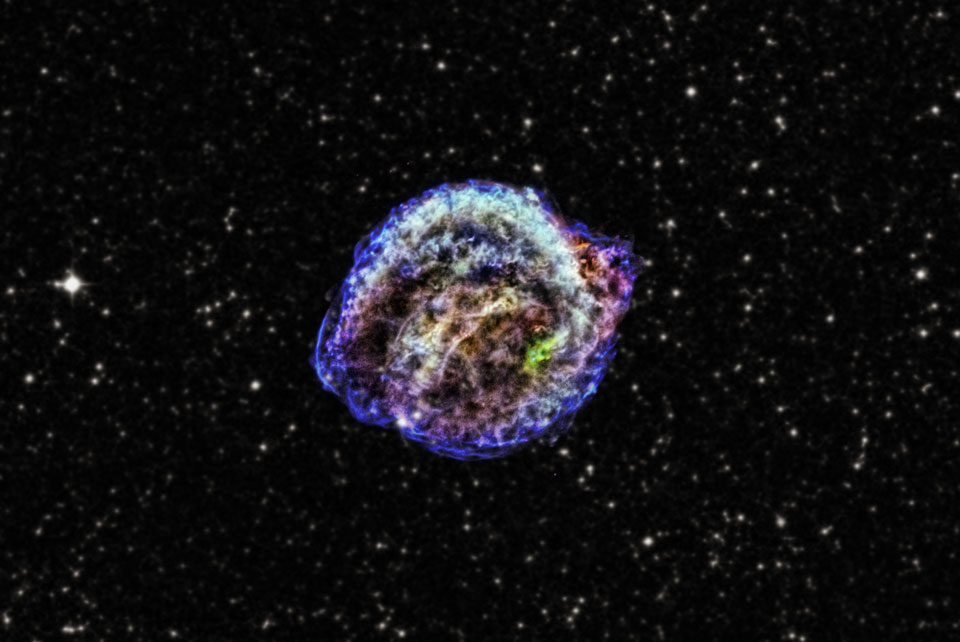 Explanation: What caused this mess? Some type of star exploded to create the unusually shaped nebula known as Kepler's supernova remnant, but which type? Light from the stellar explosion that created this energized cosmic cloud was first seen on planet Earth in October 1604, a mere four hundred years ago. The supernova produced a bright new star in early 17th century skies within the constellation Ophiuchus. It was studied by astronomer Johannes Kepler and his contemporaries, without the benefit of a telescope, as they searched for an explanation of the heavenly apparition. Armed with a modern understanding of stellar evolution, early 21st century astronomers continue to explore the expanding debris cloud, but can now use orbiting space telescopes to survey Kepler's supernova remnant (SNR) across the spectrum. Recent X-ray data and images of Kepler's supernova remnant taken by the orbiting Chandra X-ray Observatory has shown relative elemental abundances typical of a Type Ia supernova, and further indicated that the progenitor was a white dwarf star that exploded when it accreted too much material from a companion Red Giant star and went over Chandrasekhar's limit. About 13,000 light years away, Kepler's supernova represents the most recent stellar explosion seen to occur within our Milky Way galaxy.