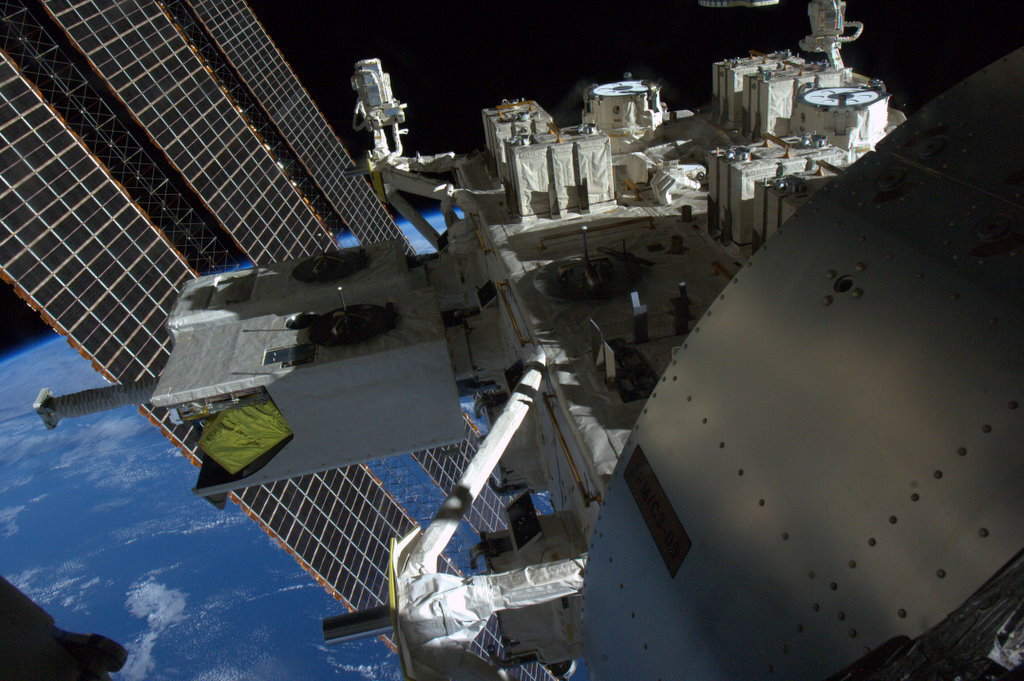 Explanation: If you glanced out a side window of the International Space Station, what might you see? If you were Expedition 34 flight engineer Chris Hadfield, and you were looking out one of windows of Japan's Kibo Research Module on February 26, you might have seen the above vista. In the distance lies the darkness of outer space and the blueness of planet Earth. Large ISS objects include long solar panels that stretch diagonally from the upper left and the cylindrical airlock of the Pressurized Module that occupies the lower right. Numerous ports and platforms of the space station are visible and labeled on an annotated companion image. Of particular note is what looks to be a washer - dryer pair toward the image left, which are really NASA's HREP (near) and JAXA's MCE (far) research platforms. The gold foil covered experiment in the rear of HREP is the Remote Atmospheric and Ionospheric Detection System (RAIDS) that monitors atmospheric airglow, while MCE includes the Global Lightning and Sprite Measurements (JEM-GLIMS) instrument that monitors atmospheric electrical discharges. The current Expedition 35 crew is now commanded by Colonel Hadfield and scheduled to stay aboard the space station until May.

Follow APOD in Spanish: On the web with Observatorio and on Facebook with Universo
Tomorrow's picture: darkened city upon the sea < | Archive | Index | Search | Calendar | RSS | Education | About APOD | Discuss | >