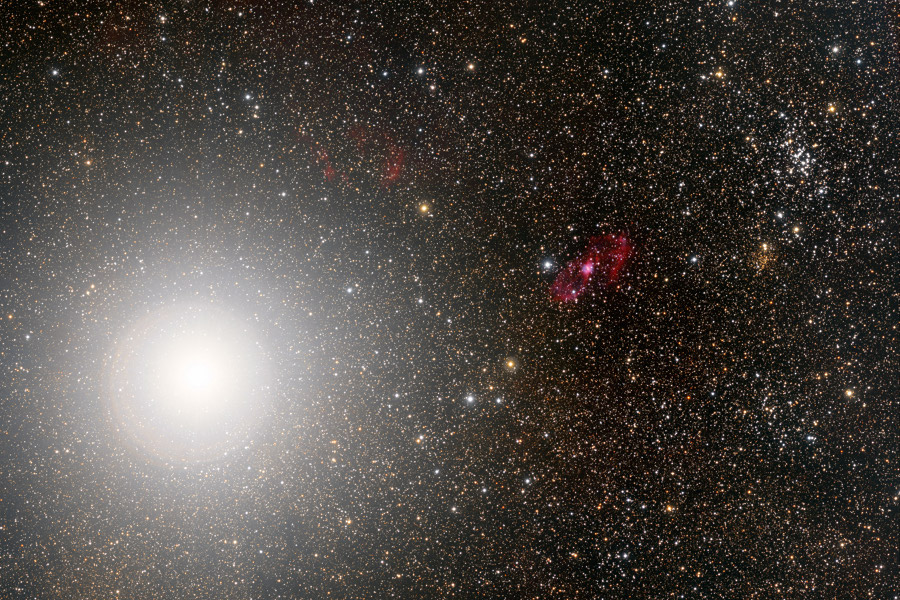 Explanation: The glare of Alpha Centauri, one of the brightest stars in planet Earth's night sky, floods the left side of this southern skyscape. A mere 4.3 light-years distant, Alpha Centauri actually consists of two component stars similar in size to the Sun, locked in a mutual orbit. Much smaller and cooler, a third member of the same star system, Proxima Centauri, lies outside this field of view. Still, the telescopic scene does reveal often overlooked denizens of the Milky Way's crowded galactic plane that lie beyond the glare of Alpha Centauri, including a planetary nebula cataloged as Hen 2-111, an estimated 7,800 light-years away. The gaseous shroud of a dying star, the nebula's brighter core and fainter halo of reddish ionized gas span over twenty light-years, seen just right of picture center. Farther right are two notable open clusters of stars, the compact Pismis 19 also nearly 8,000 light-years away whose light is reddened by intervening dust, and the looser, closer NGC 5617. Just visible in the glare of Alpha Centauri is the dim glow of a shell-like supernova remnant, above and right of the closest star system's bright core.