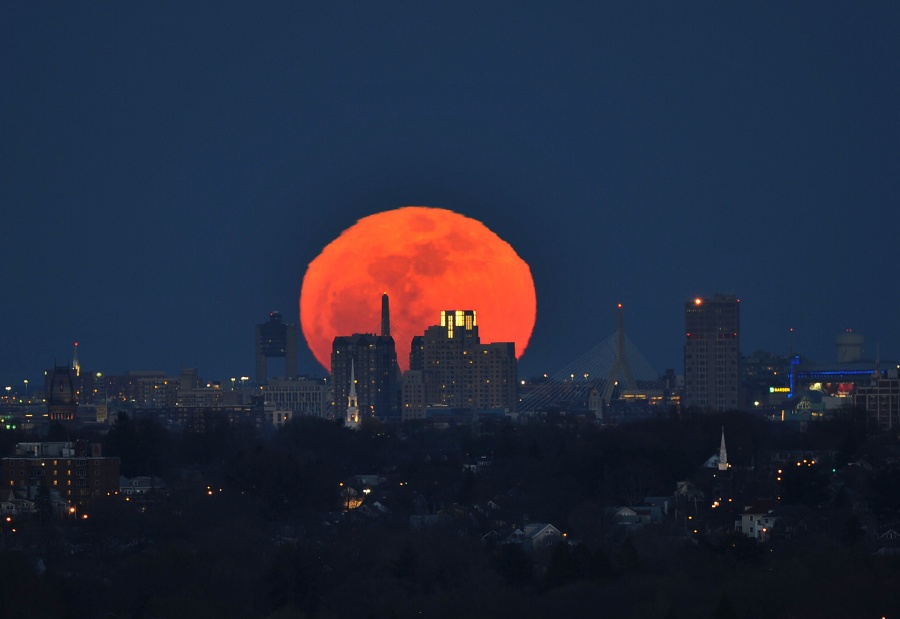 Explanation: Last week's Full Moon was hard to miss. Rising on March 19, its exact full phase occurred within an hour of perigee, the closest point in the Moon's orbit to Earth. As a result it appeared some 14 percent larger and 30 percent brighter than a Full Moon near apogee, the most distant point in the elliptical lunar orbit. Seen here, the near perigee Full Moon still hugs the horizon, distorted by atmospheric refraction as it rises over Boston, Massachusetts, USA. The telescopic night skyscape was shot from Prospect Hill in Waltham, Massachusetts, roughly 10 miles from the Boston skyline. Just to the left of the orange lunar disk is the distinctive control tower at Boston's Logan International Airport. Topped by lights, the tall, twin towers of the cable-stayed Zakim Bridge spanning the Charles River are also included in the scene. If you managed to miss this perigee Full Moon, make a note on your calendar. Your next chance to see the Moon this large and bright, this time at full phase within only a few minutes of lunar perigee, will be next year on May 6.