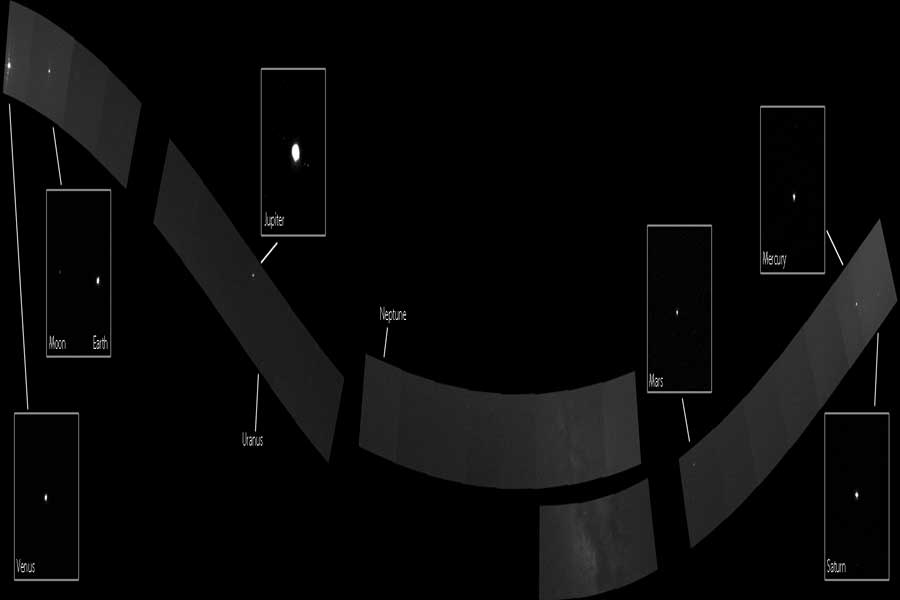 Explanation: If you looked out from the center of the Solar System, what would you see? Nearly such a view was taken recently from the MESSENGER spacecraft currently orbiting the Sun from the distance of Mercury. The Sun's planets all appear as points of light, with the closest and largest planets appearing the brightest. The planets all appear to orbit in the same direction and are (nearly) confined to the same great circle around the sky -- the ecliptic plane. Mercury, Venus, Earth, Mars, Jupiter, and Saturn are all visible in the above horizontally compressed image, while the positions of Uranus and Neptune are labeled even though they are too faint to make out. Pluto, which has had its planetary status recently called into question, is much too faint to see. Earth's Moon is visible, however, as are the Galilean moons of Jupiter. The above image is the reverse of one taken from the outside of the Solar System in 1990 by Voyager 1. MESSENGER, which has flown by Mercury three times now, is on schedule to enter orbit around the Solar System's innermost planet next month.