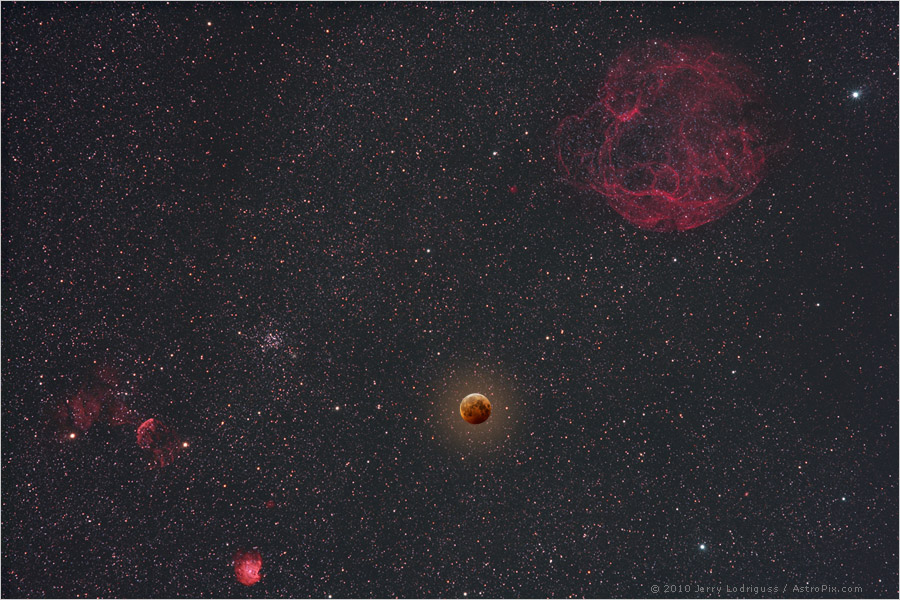 Explanation: Sometime after sunset tonight, the Moon will go dark. This total lunar eclipse, where the entire Moon is engulfed in the shadow of the Earth, will be visible from all of North America, while the partial phase of this eclipse will be visible throughout much of the rest of the world. Observers on North America's east coast will have to wait until after midnight for totality to begin, while west coasters should be able to see a fully darkened moon before midnight. Pictured above is a digital prediction, in image form, for how the Moon and the surrounding sky could appear near maximum darkness. Rolling your cursor over the image will bring up labels. Parts of the Moon entering the circle labeled umbra will appear the darkest since the Sun there will be completely blocked by the Earth. Parts of the Moon entering the circle labeled penumbra will be exposed to some direct sunlight, and so shine by some degree by reflected light. The diminished glare of the normally full Moon will allow unusually good viewings of nearby celestial wonders such as the supernova remnant Simeis 147, the open star cluster M35, and the Crab Nebula M1. By coincidence this eclipse occurs on the day with the shortest amount of daylight in the northern hemisphere -- the Winter Solstice. This solstice eclipse is the first in 456 years, although so far it appears that no one has figured out when the next solstice eclipse will be.