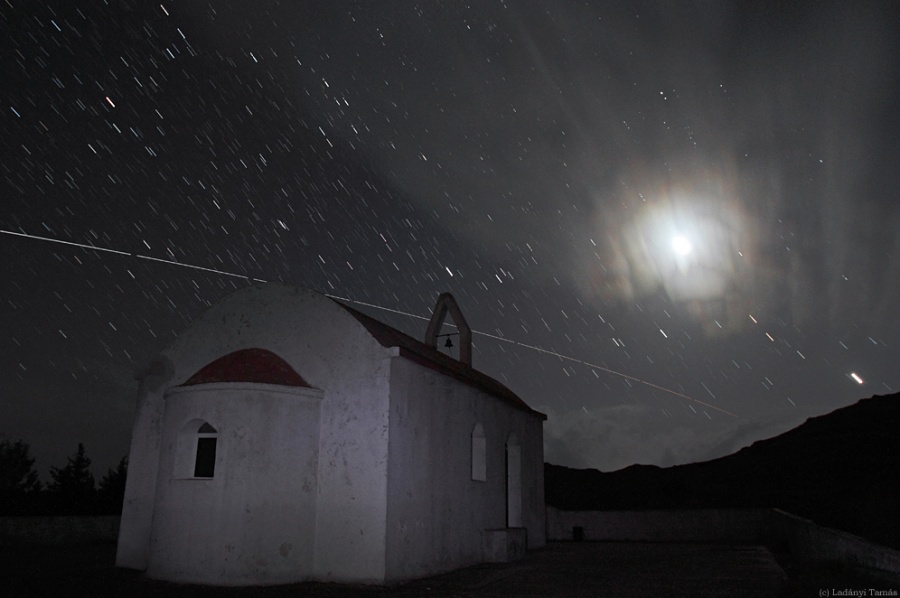 Explanation: A moonlit chapel stands in the foreground of this night-scape from the historic Greek island of Rhodes. The tantalizing sky above features a colorful lunar corona, where bright moonlight is diffracted by water droplets in the thin clouds drifting in front of the lunar disk. Captured in the early evening on May 17, the image is a composite of 9 exposures in sequence, each 20 seconds long. It shows star trails too, including the very bright trail of planet Venus setting, below the Moon, near the right edge of the frame. Arcing from the horizon on the right to the picture's left edge is a surprisingly colorful trail produced by space shuttle orbiter Atlantis docked with the International Space Station. Some 350 kilometers above Earth's surface, the orbiter and station pair are still bathed in sunlight. Though it might seem more appropriate when seen in skies over Rhodes, the shuttle orbiter Atlantis wasn't directly named for the legendary island of Atlantis. Instead, it was named for 1930s vintage sailing ship RV Atlantis, the first research vessel operated by the Woods Hole Oceanographic Institute.