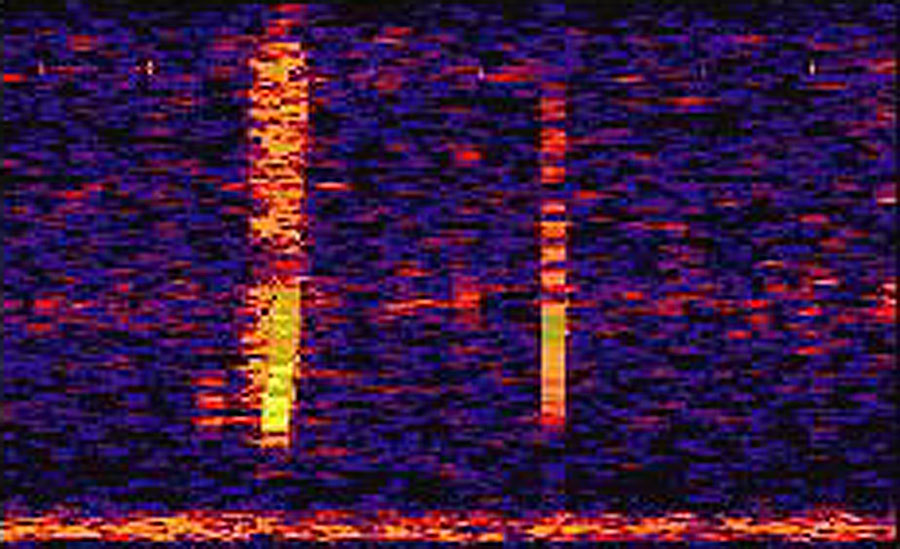 The Bloop: A Mysterious Sound from the Deep Ocean
Credit: NOAA, SOSUS

Explanation: What created this strange sound in Earth's Pacific Ocean? Pictured above is a visual representation of a loud and unusual sound, dubbed a Bloop, captured by deep sea microphones in 1997. In the above graph, time is shown on the horizontal axis, deep pitch is shown on the vertical axis, and brightness designates loudness. Although Bloops are some of the loudest sounds of any type ever recorded in Earth's oceans, their origin remains unknown. The Bloop sound was placed as occurring several times off the southern coast of South America and was audible 5,000 kilometers away. Although the sound has similarities to those vocalized by living organisms, not even a blue whale is large enough to croon this loud. The sounds point to the intriguing hypothesis that even larger life forms lurk in the unexplored darkness of Earth's deep oceans. A less imagination-inspiring possibility, however, is that the sounds resulted from some sort of iceberg calving. No further Bloops have been heard since 1997, although other loud and unexplained sounds have been recorded.