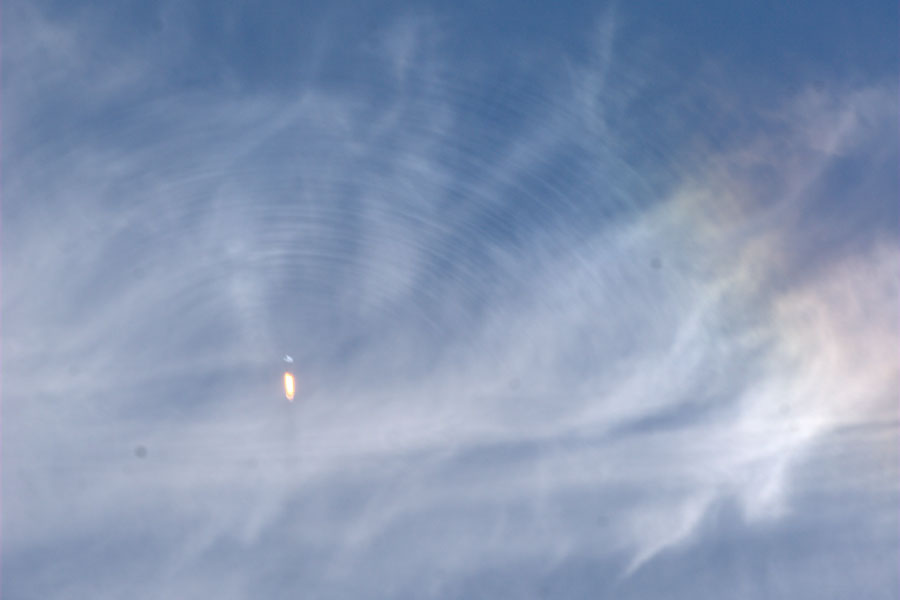 Explanation: What created those rocket waves, and why did they destroy that sun dog? Close inspection of the above image shows not only a rocket rising near the center, but unusual air ripples around it and a colorful sundog to the far right. The rocket, carrying the Solar Dynamics Observatory (SDO), lifted off two weeks ago from Cape Canaveral, Florida, USA into a cold blue sky. The SDO is designed to observe the Sun continuously over the next several years, exploring the Sun's atmosphere at high resolution and fast time scales. The air ripples -- seen about one minute after launch -- were unexpected, as was the sudden disappearance of the sundog after the ripples passed. Noticed and recorded by several onlookers, there has been much speculation about the origin of the ripples. An ongoing discussion about them can be joined here in APOD's discussion board the Asterisk. A leading hypothesis holds that the ripples resulted from a sonic boom created as the rocket broke the sound barrier, which then jumbled a thin layer of ice crystals that were aligned to create the sundog. Lingering questions include why other rocket launches don't produce air ripples as noticeable, and why the ripples appeared more prominent above the rocket. If you know of images of any other aircraft or spacecraft that have produced similar air ripples, please post them to the discussion thread -- they may be help create a better understanding of the effect.