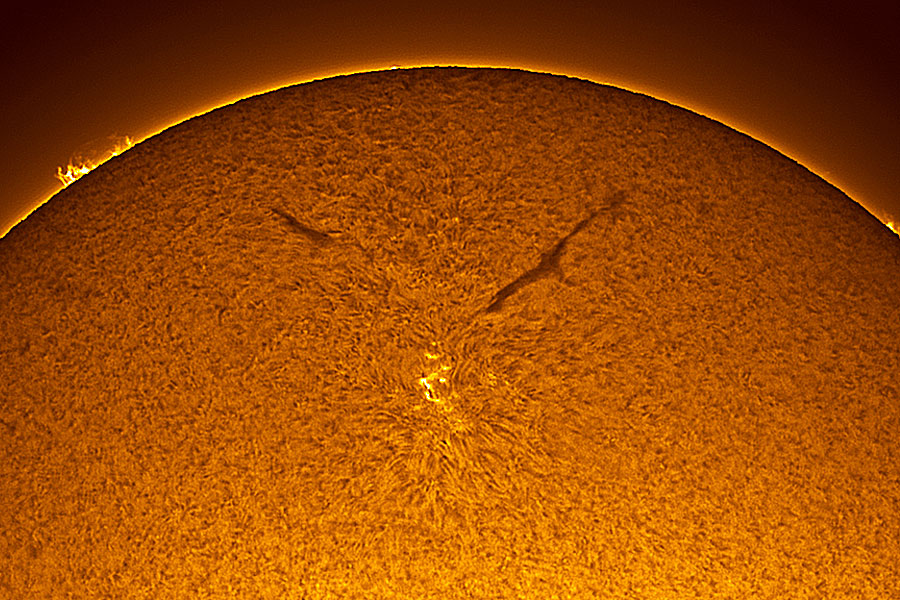 Explanation: A new cycle has begun on our Sun. Over the past year, the Sun's magnetic field has reset and now a new 11 year period is beginning. Pictured above in a specific color of light emitted by hydrogen is sunspot 10982, one of the last sunspots of the old solar cycle. The two dark lines visible just above and to either side of the bright sunspot are cool filaments held aloft by the Sun's magnetic field. Hot and cold regions are shown as regions of relative light and dark, respectively. A solar cycle is caused by the changing magnetic field, and varies from solar maximum, when sunspot, coronal mass ejection, and flare phenomena are most frequent, to solar minimum, when such activity is relatively infrequent. Solar minimums occurred in 1996 and 2007, while the last solar maximum occurred in 2001.


Editor's note: This APOD originally ran under the title "A Sunspot in the New Solar Cycle." But even though the new solar cycle has begun, the old one has not ended yet and may run concurrently with the new cycle for up to a year or so. This sunspot is now thought to belong to the old cycle, not the new one, based on its measured magnetic polarity and location.
Tomorrow's picture: island universe < | Archive | Index | Search | Calendar | RSS | Education | About APOD | Discuss | >