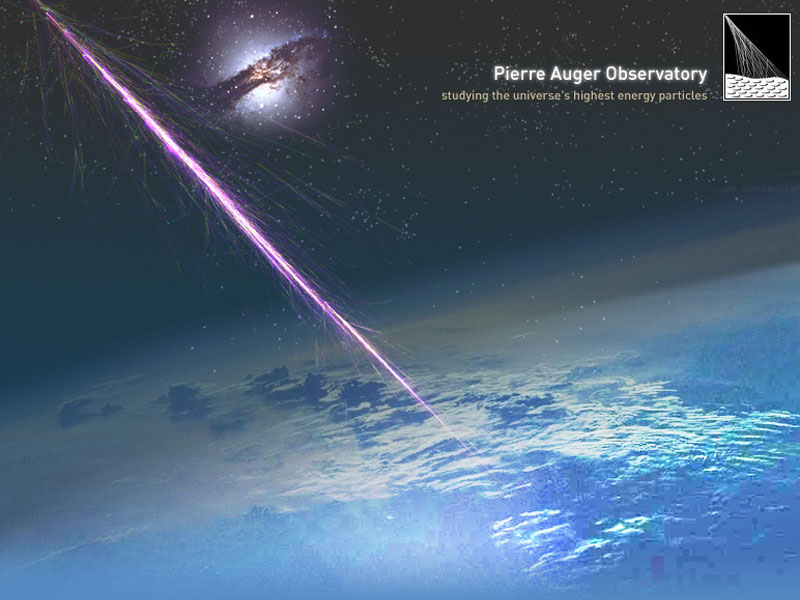 Explanation: Where do cosmic rays come from? A major step toward answering this century old question may have just come in from the Auger Observatory project, the world's premier cosmic ray observatory. That high energy fundamental particles are barreling through the universe has been known for about a century. Because ultra high energy cosmic rays are so rare and because their extrapolated directions are so imprecise, no progenitor objects have ever been unambiguously implied. New results from Auger, however, indicate that 12 of 15 ultra high energy cosmic rays have sky directions statistically consistent with the positions of nearby active galactic nuclei. These galactic centers are already known to emit great amounts of light and are likely powered by large black holes. The Auger results also indicate that the highest energy cosmic rays are protons, since the electric charge of higher energy nuclei would force the Milky Way Galaxy's magnetic field to deflect and effectively erase progenitor source direction. Pictured above, an artist illustrates a cosmic ray striking the Earth's atmosphere and creating a shower of secondary particles detectable on the surface. The image of Centaurus A digitally superposed near the top signifies one such active galaxy from which cosmic rays might originate.