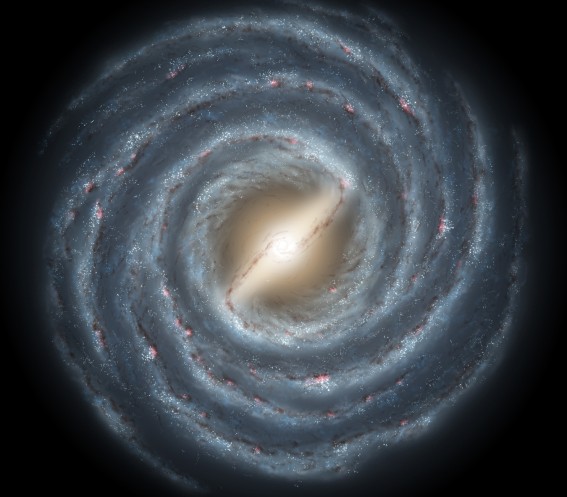 Explanation: A recent survey of stars conducted with the Spitzer Space Telescope is convincing astronomers that our Milky Way Galaxy is not just your ordinary spiral galaxy anymore. Looking out from within the Galaxy's disk, the true structure of the Milky Way is difficult to discern. However, the penetrating infrared census of about 30 million stars indicates that the Galaxy is distinguished by a very large central bar some 27,000 light-years long. In fact, from a vantage point that viewed our galaxy face-on, astronomers in distant galaxies would likely see a striking barred spiral galaxy suggested in this artist's illustration. While previous investigations have identified a small central barred structure, the new results indicate that the Milky Way's large bar would make about a 45 degree angle with a line joining the Sun and the Galaxy's center. DON'T PANIC ... astronomers still place the Sun beyond the central bar region, about a third of the way in from the Milky Way's outer edge.