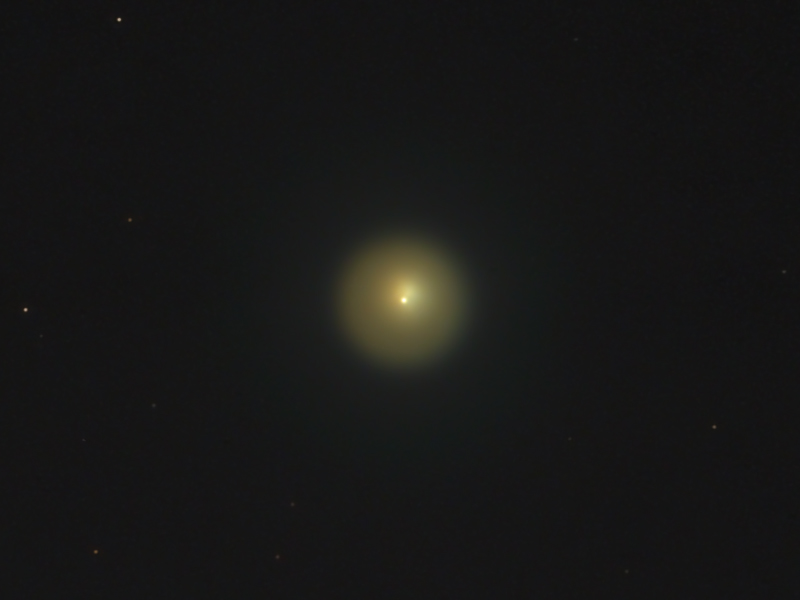 Explanation: What's happened to Comet Holmes? A normally docile comet discovered over 100 years ago, Comet 17P/Holmes suddenly became nearly one million times brighter last week, possibly over just a few hours. In astronomical terms, the comet brightened from magnitude 17, only visible through a good telescope, to magnitude 3, becoming visible with the unaided eye. Comet Holmes had already passed its closest to the Sun in 2007 May outside the orbit of Mars and was heading back out near Jupiter's orbit when the outburst occurred. The comet's sudden brightening is likely due to some sort of sunlight-reflecting outgassing event, possibly related to ice melting over a gas-filled cavern, or possibly even a partial breakup of the comet's nucleus. Pictured above through a small telescope last Thursday, Comet Holmes appeared as a fuzzy yellow spot, significantly larger in angular size than Earth-atmosphere blurred distant stars. Although Comet Holmes' orbit will place it in northern hemisphere skies for the next two years, whether it will best be viewed through a telescope or sunglasses remains unknown.