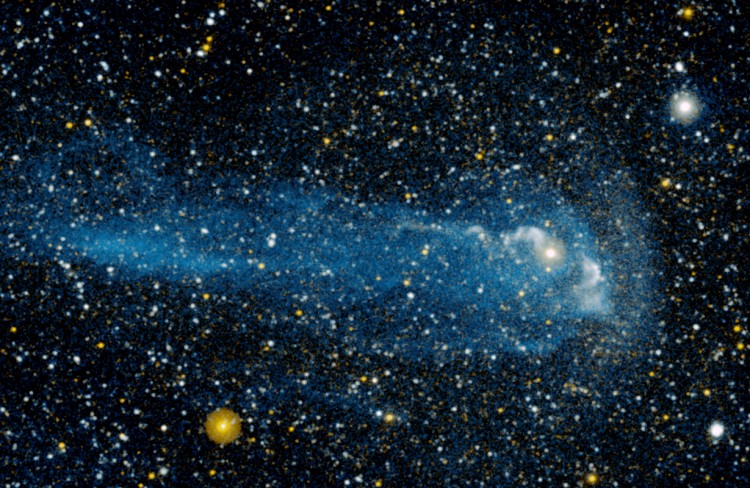 Explanation: To seventeenth century astronomers, Omicron Ceti or Mira was known as a wonderful star, a star whose brightness could change dramatically in the course of about 11 months. Mira is now seen as the archetype of an entire class of long-period variable stars. Surprisingly, modern astronomers have only recently discovered another striking characteristic of Mira -- an enormous comet-like tail nearly 13 light-years long. The discovery was made using ultraviolet image data from the Galaxy Evolution Explorer (GALEX) satellite. Billions of years ago Mira was likely similar to our Sun, but has now become a swollen red giant star, its outer layers of material blowing off into interstellar space. Fluorescing in ultraviolet light, the cast off material trails behind the giant star as it plows through the surrounding interstellar medium at 130 kilometers per second. The amount of material in Mira's tail is estimated to be equivalent to 3,000 times the mass of planet Earth. About 400 light-years away toward the constellation Cetus, Mira is presently too faint to be seen by the unaided eye, but will become visible again in mid-November.