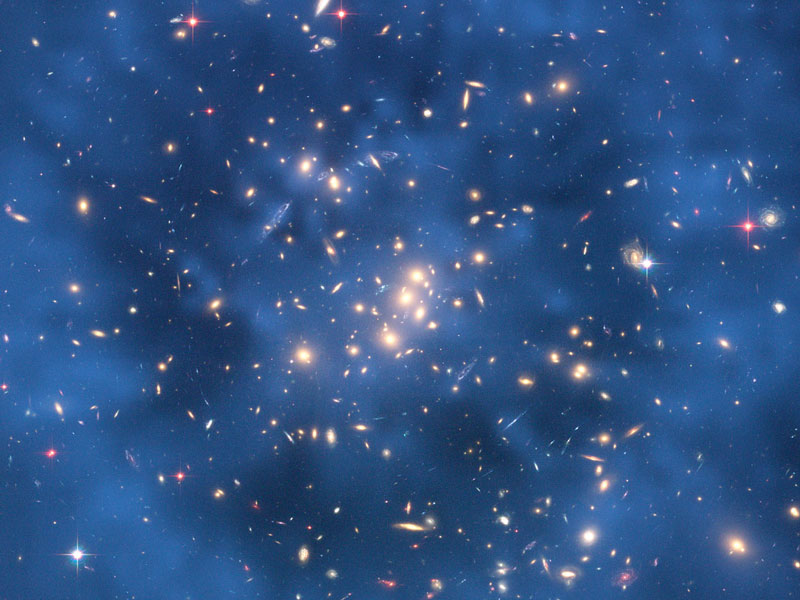 Explanation: How do we know that dark matter isn't just normal matter exhibiting strange gravity? A new observation of gravitationally magnified faint galaxies far in the distance behind a massive cluster of galaxies is shedding new dark on the subject. The above detailed image from the Hubble Space Telescope indicates that a huge ring of dark matter likely exists surrounding the center of CL0024+17 that has no normal matter counterpart. What is visible in the above image, first and foremost, are many spectacular galaxies that are part of CL0024+17 itself, typically appearing tan in color. Next, a close inspection of the cluster center shows several unusual and repeated galaxy shapes, typically more blue. These are multiple images of a few distant galaxies, showing that the cluster is a strong gravitational lens. It is the relatively weak distortions of the many distant faint blue galaxies all over the image, however, that indicates the existence of the dark matter ring. The computationally modeled dark matter ring spans about five million light years and been digitally superimposed to the image in diffuse blue. A hypothesis for the formation of the huge dark matter ring holds that it is a transient feature formed when galaxy cluster CL0024+17 collided with another cluster of galaxies about one billion years ago, leaving a ring similar to when a rock is thrown in a pond.