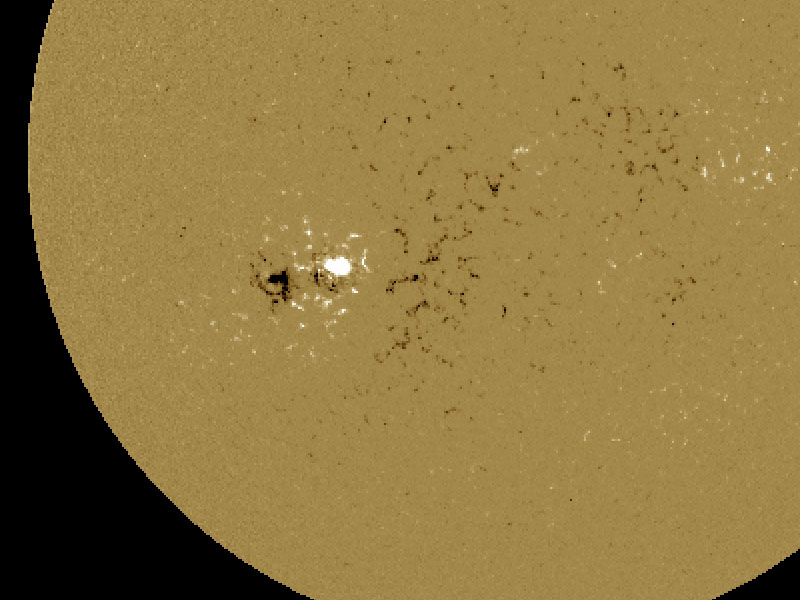 Explanation: Why is sunspot 905 backwards? Perhaps it is a key marker for the beginning of a new magnetic cycle on our Sun. Every 11 years, our Sun goes through a magnetic cycle, at the end of which its overall magnetic orientation is reversed. An 11-year solar cycle has been observed for hundreds of years by noting peaks and valleys in the average number of sunspots. Just now, the Sun is near Solar Minimum, and likely to start a long progression toward the most active time, called Solar Maximum, in about 5.5 years. An indicator that the sun's magnetic field is reversing is the appearance of sunspots with the reverse magnetic polarity than normal. A few weeks ago, one small candidate reverse sunspot was sighted but faded quickly. Now, however, a larger sunspot with negative polarity is being tracked. This sunspot, numbered 905, appears as the unusual white spot in the above magnetic image of the Sun taken with the SOHO spacecraft a few days ago. In the past few days, Sunspot 905 has actually begun to break apart and might also become the source of coronal mass ejections and explosive solar flares. Solar astronomers predict that the coming Solar Maximum will be unusually active.