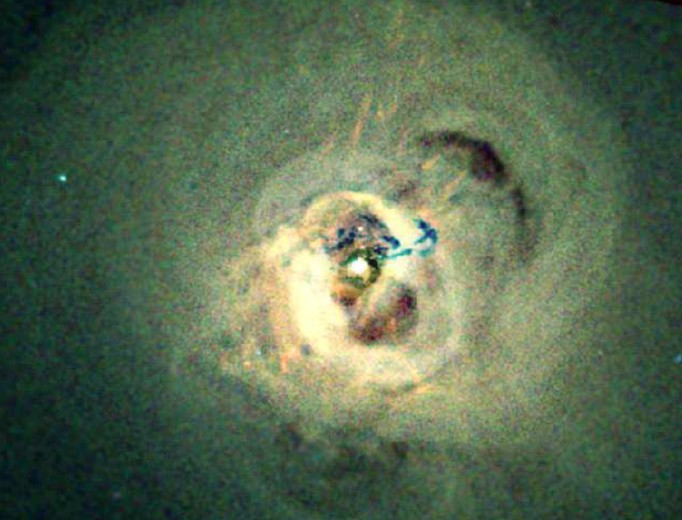 Explanation: The Perseus Cluster of thousands of galaxies, 250 million light-years distant, is one of the most massive objects in the Universe and the brightest galaxy cluster in the x-ray sky. At its core lies the giant cannibal galaxy Perseus A (NGC 1275), accreting matter as gas and galaxies fall into it. This deep Chandra Observatory x-ray image spans about 300,000 light-years across the galaxy cluster core. It shows remarkable details of x-ray emission from the monster galaxy and surrounding hot (30-70 million degrees C) cluster gas. The bright central source is the supermassive black hole at the core of Perseus A itself. Low density regions are seen as dark bubbles or voids, believed to be generated by cyclic outbursts of activity from the central black hole. The activity creates pressure waves - sound waves on a cosmic scale- that ripple through the x-ray hot gas. Dramatically, the blue-green wisps just above centre in the false-color view are likely x-ray shadows of the remains of a small galaxy falling into the burgeoning Perseus A.