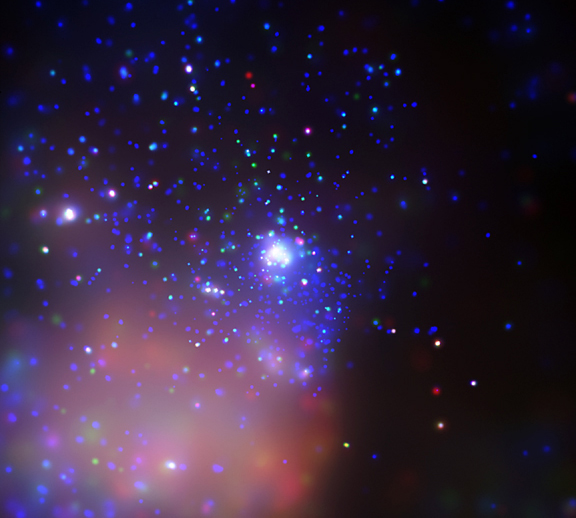 Explanation: A wonder of planet Earth's southern sky, star cluster Trumpler 14 lies about nine thousand light-years away in the Carina complex -- a rich star forming region at the edge of a giant molecular cloud. This false-color x-ray portrait of Trumpler 14 from the orbiting Chandra Observatory spans over 40 light-years and reveals stunning details of a cluster with one of the highest concentrations of massive stars in the Galaxy. Profoundly affecting their environment, the hot cluster stars are themselves a mere one million years old. Energetic winds from the stars have cleared out a cavity in the dense cloud, filling it with shock heated, x-ray emitting gas. Still to come, the next few million years will see these stellar prodigies rapidly exhaust their nuclear fuel and explode in violent supernovae, flooding their cosmic neighborhood with gas enriched in heavy elements.