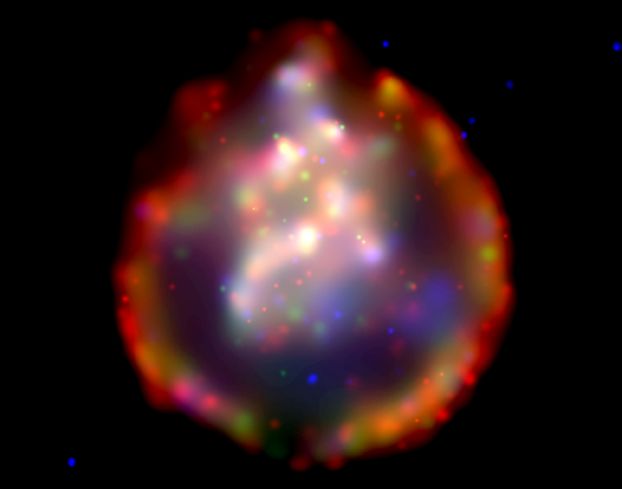 Explanation: A supernova explosion, a massive star's inevitable and spectacular demise, blasts back into space debris enriched in the heavy elements forged in its stellar core. Incorporated into future stars and planets, these are the elements ultimately necessary for life. Seen here in a false-color x-ray image, supernova remnant SNR 0103-72.6 is revealed to be just such an expanding debris cloud in neighboring galaxy, the Small Magellanic Cloud. Judging from the measured size of the expanding outer ring of shock-heated gas, about 150 light-years, light from the original supernova explosion would have first reached Earth about 10,000 years ago. Hundreds of supernova remnants have been identified as much sought after astronomical laboratories for studying the cycle of element synthesis and enrichment, but the x-ray data also show that the hot gas at the center of this particular supernova remnant is exceptionally rich in neon and oxygen.