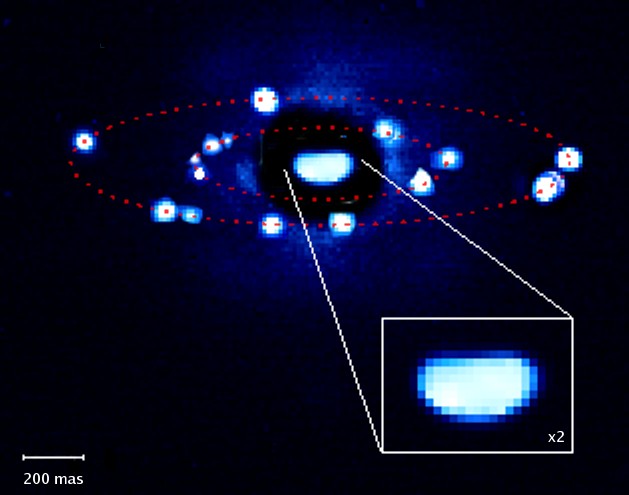 Explanation: Discovered in 1866, main belt asteroid 87 Sylvia lies 3.5 AU from the Sun, between the orbits of Mars and Jupiter. Also shown in recent years to be one in a growing list of double asteroids, new observations during August and October 2004 made at the Paranal Observatory convincingly demonstrate that 87 Sylvia in fact has two moonlets - the first known triple asteroid system. At the center of this composite of the image data, potato-shaped 87 Sylvia itself is about 380 kilometers wide. The data show inner moon, Remus, orbiting Sylvia at a distance of about 710 kilometers once every 33 hours, while outer moon Romulus orbits at 1360 kilometers in 87.6 hours. Tiny Remus and Romulus are 7 and 18 kilometers across respectively. Because 87 Sylvia was named after Rhea Silvia, the mythical mother of the founders of Rome, the discoverers proposed Romulus and Remus as fitting names for the two moonlets. The triple system is thought to be the not uncommon result of collisions producing low density, rubble pile asteroids that are loose aggregations of debris.