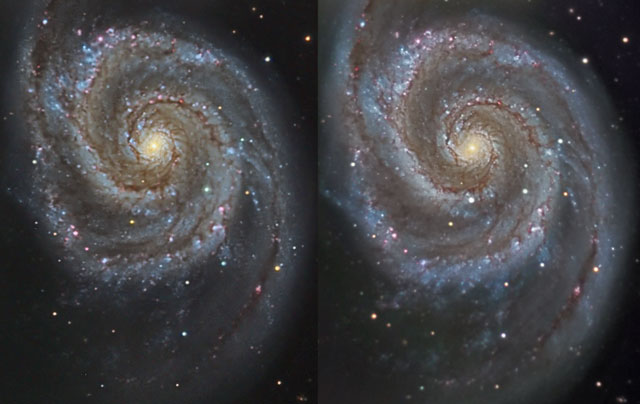 Explanation: One of the nearest supernovas of recent years was discovered late last month in the bright nearby galaxy M51. It is visible on the right of the above before and after images of the picturesque spiral. Can you spot it? The supernova, discovered originally by Wolfgang Kloehr and now dubbed 2005cs, is still near its maximum brightness and visible with a telescope toward the constellation of the Hunting Dogs (Canes Venatici). The supernova has been identified as a Type II but has an unusual brightness history, creating speculation that is similar in nature to the brightest supernova of modern times: 1987A. The progenitor star has been identified as a bright blue star. Although hundreds of supernovas are discovered each year by automated searches, nearby supernova are rare and important because they frequently become bright enough to be studied by many telescopes and are near enough for their (former) host star and immediate surroundings to be spatially resolved. Supernova 2005cs may have left behind a core that has been compressed into a neutron star or black hole.