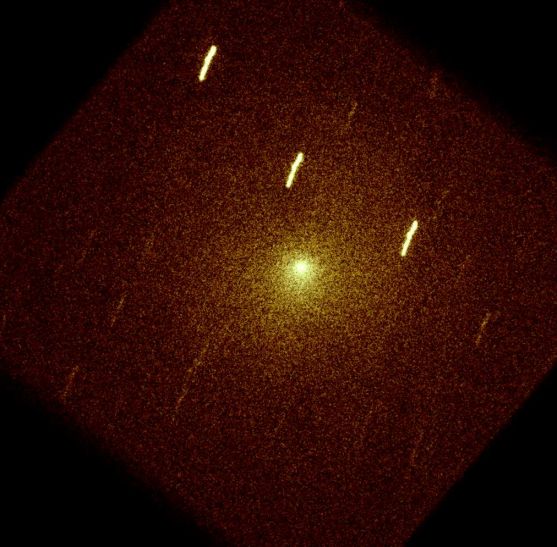 Explanation: Comet Tempel 1 is targeted for a collision with the impactor probe from NASA's Deep Impact Spacecraft at about 1:52am EDT on July 4th (other time zones). Cameras on the impactor probe and the flyby spacecraft will capture close-up images of the event - expected to produce a crater on the surface of the comet's nucleus. Of course, Earth-orbiting and ground-based telescopes will be watching too, including instruments on the Swift satellite normally used to spot gamma-ray bursts in the distant universe. Swift's ultraviolet telescope recorded this picture of Tempel 1 on June 29th. Because the image is registered on the comet, the background stars appear as short trails. Want to follow the encounter? Media coverage chronicling the event, and the possibilities for viewing the comet with small telescopes can be found through the Deep Impact website. Updated images will also be available from the Kitt Peak National Observatory.