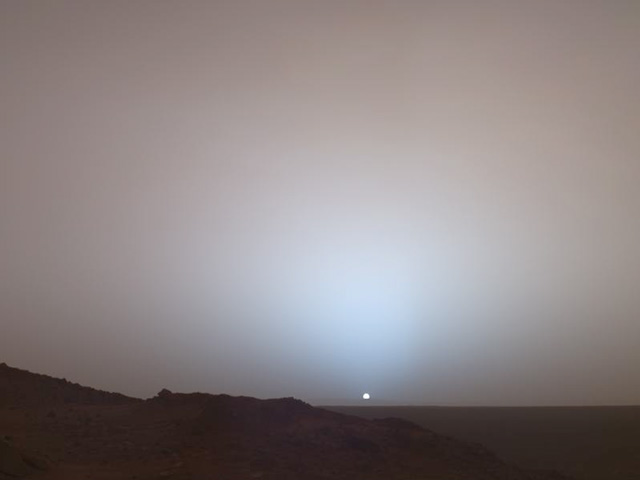 Explanation: What would it be like to see a sunset on Mars? To help find out, the robotic rover Spirit was deployed last month to park and serenely watch the Sun dip below the distant lip of Gusev crater. It was a tough job, but some robot had to do it. Now on Earth a red sunset is caused by two effects -- by blue light being preferentially scattered out of sunlight by oxygen and nitrogen molecules in the atmosphere, and by scattering off a small amount of impurities like volcanic dust. (The magnitude of the first effect was computed in one of Albert Einstein's most cited papers.) Although Mars lacks oxygen and nitrogen, it is covered in red dust frequently hoisted into the atmosphere by fast but thin winds. Analyses of images like the above photograph show that at least some Martian days are capped by a sunset significantly longer and redder than typical on Earth. For up to two hours after twilight, sunlight continued to reflect off Martian dust high in the atmosphere, casting a diffuse glow. The result helps atmospheric scientists understand not only the atmosphere of Mars, but atmospheres across the Solar System, including our home Earth.