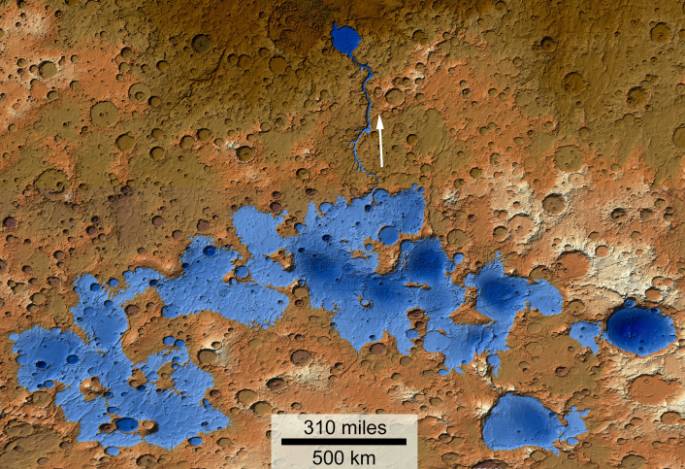 Explanation: Just as erosion from the Colorado River carved the Grand Canyon on Earth, a river of flood water may have carved Ma'adim Vallis, one of the largest canyons on Mars. Researchers have presented strong evidence for such a scenario based on elevation data recorded by the MOLA (Mars Orbiter Laser Altimeter) experiment on the Mars Global Surveyor spacecraft. This false-color, detailed, topographical map of MOLA data shows in blue the area of an enormous complex of lakes that are thought to have existed over three and a half billion years ago in the southern highlands of Mars. As the largest lake spilled over the low point in its boundary a torrential flood would have moved north, along the direction indicated by the arrow, carving the sinuous Ma'adim Vallis. At the north end of Ma'adim Vallis, the flood waters would have poured into large, round Gusev Crater. Since standing bodies of surface water are thought to be favorable for ancient martian microbial life, Gusev Crater has been suggested as a landing site for future Mars missions.