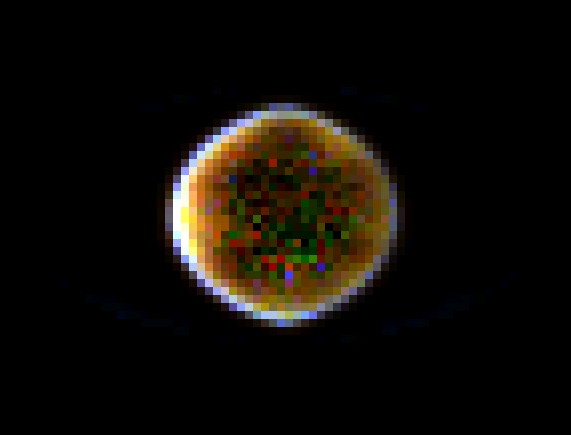 Explanation: The pixelated planet above is actually our own planet Earth seen in gamma rays - the most energetic form of light. In fact, the gamma rays used to construct this view pack over 35 million electron volts (MeV) compared to a mere two electron volts (eV) for a typical visible light photon. The Earth's gamma-ray glow is indeed very faint, and this image was constructed by combining data from seven years of exposure during the life of the Compton Gamma Ray Observatory, operating in Earth orbit from 1991 to 2000. Brightest near the edge and faint near the center, the picture indicates that the gamma rays are coming from high in Earth's atmosphere. The gamma rays are produced as the atmosphere interacts with high energy cosmic rays from space, blocking the harmful radiation from reaching the surface. Astronomers need to understand Earth's gamma-ray glow well as it can interfere with observations of cosmic gamma-ray sources like pulsars, supernova remnants, and distant active galaxies powered by supermassive black holes.