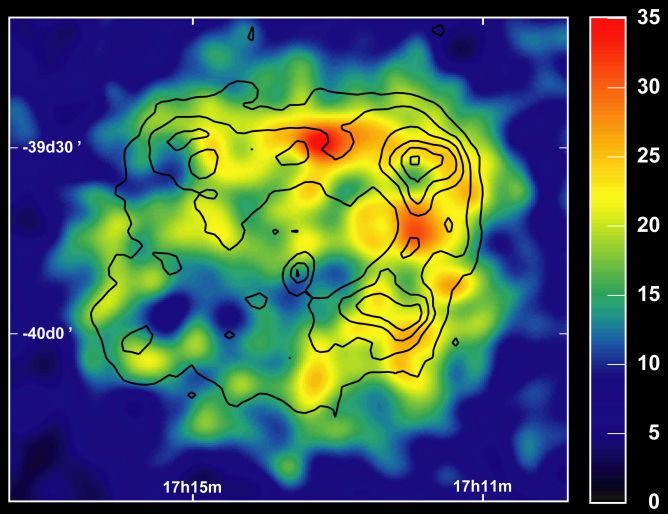 Explanation: Gamma rays are the most energetic form of light. With up to a billion times the energy of ordinary "medical" x-rays, they easily penetrate telescope lenses and mirrors, making it very difficult to create gamma-ray images of cosmic sources. Still, an array of large telescopes designed to detect gamma-ray induced atmospheric flashes - the HESS (High Energy Stereoscopic System) experiment - has produced this historic, resolved image of a supernova remnant at extreme gamma-ray energies. Astronomers note that the premier gamma-ray view of the expanding stellar debris cloud is clearly similar to x-ray images of the remnant and convincingly supports the idea that these sites of powerful shock waves are also sources of cosmic rays within our galaxy. The gamma-ray intensity is color-coded in the picture, shown with dark contour lines that trace levels of x-ray emission from the object. At an estimated distance of 3,000 light-years, the supernova remnant measures about 50 light-years across and lies near the galactic plane.