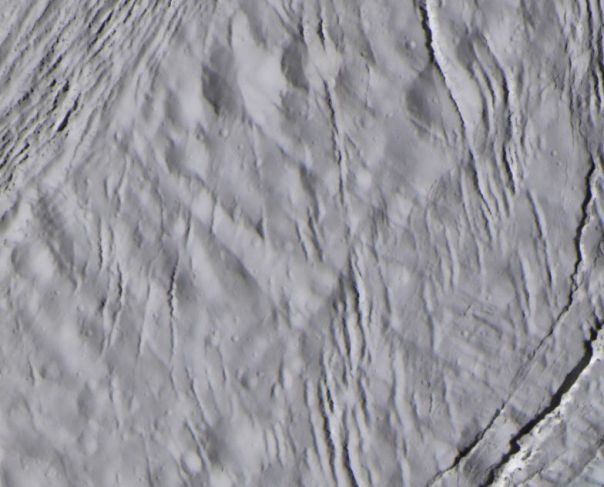 Explanation: The surface of Enceladus is as white as fresh snow. Still, an impressive variety of terrain is revealed in this contrast enhanced image. At a resolution of about 30 meters per pixel, the close-up view spans over 20 kilometers - recorded during the touring Cassini spacecraft's March flyby of the icy Saturnian moon. Enceladus is known to be the most reflective moon in the solar system, and the recent Cassini encounters have also detected the presence of an atmosphere, making Enceladus the second moon of Saturn with such a distinction. In fact, Enceladus' fresh looking surface and significant atmosphere both indicate that the tiny, 500 kilometer diameter moon is active. Researchers suspect that ice volcanos or geysers coat the surface with fresh material and replenish the moon's atmosphere, ultimately providing the icy particles that compose Saturn's tenuous E ring.