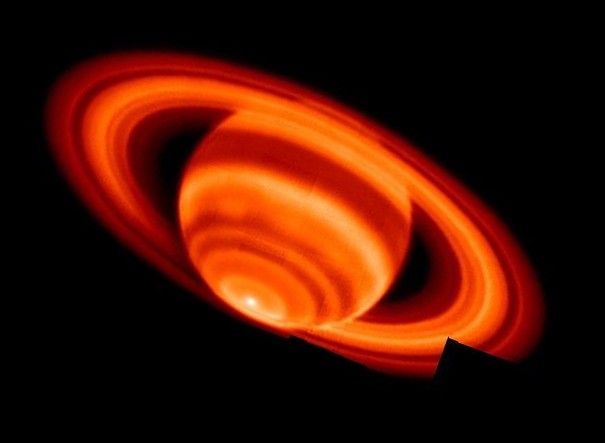 Explanation: This strange, false-color image of otherwise familiar planet Saturn shows temperature changes based on thermal infrared emission in the gas giant's atmosphere and rings. Recorded from the Keck I telescope on Mauna Kea, the sharp, ground-based picture of Saturn's southern hemisphere is a mosaic of 35 images. Based on the effects of sunlight during the southern summer season, general warming trends were anticipated. But a surprising result of the infrared image data is the a clear indication of an abruptly warmer polar cap and bright hot spot at Saturn's south pole. The warm south pole and hot spot may be unique in the solar system and a further exploration of the region is planned using instruments on the Cassini spacecraft. So how hot is Saturn's hot spot? The upper tropospheric temperature is a sweltering 91 Kelvin (-296 degrees Fahrenheit) at the pole.