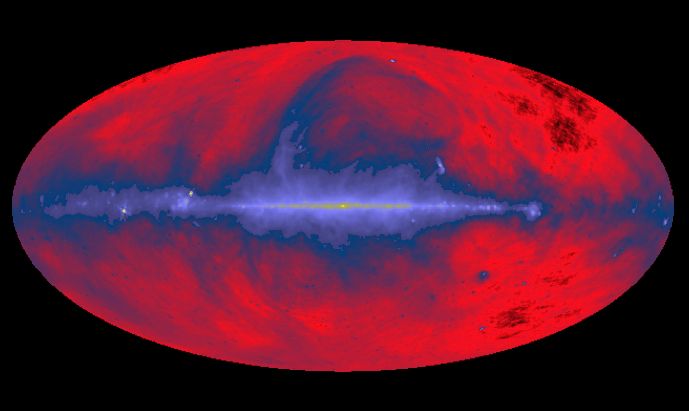 Explanation: Tune your radio telescope to 408MHz (408 million cycles per second) and check out the Radio Sky! In the 1970s large dish antennas at three radio observatories, Jodrell Bank, MPIfR, and Parkes Observatory, were used to do just that - the data were combined to map the entire sky. Near this frequency, cosmic radio waves are generated by high energy electrons spiraling along magnetic fields. In the resulting false color image, the galactic plane runs horizontally through the center, but no stars are visible. Instead, many of the bright sources near the plane are distant pulsars, star forming regions, and supernova remnants, while the grand looping structures are pieces of bubbles blown by local stellar activity. External galaxies like Centaurus A, located above the plane to the right of center, and the LMC (below and right) also shine in the Radio Sky.