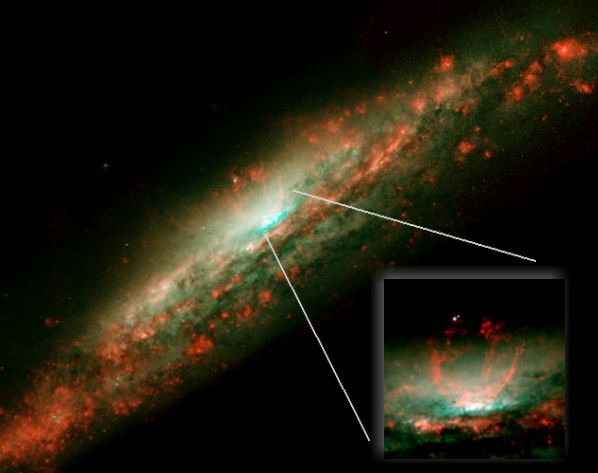 Explanation: Edge-on spiral galaxy NGC 3079 is a mere 50 million light-years away toward the constellation Ursa Major. Shown in this stunning false-color Hubble Space Telescope image, the galaxy's disk - composed of spectacular star clusters in winding spiral arms and dramatic dark lanes of dust - spans some 70,000 light-years. Still, NGC 3079's most eye-catching features are the pillars of gas which tower above a swirling cosmic cauldron of activity at the galaxy's center. Seen in the close-up inset at lower right, the pillars rise to a height of about 2,000 light-years and seem to lie on the surface of an immense bubble rising from the galactic core. Measurements indicate that the gaseous pillars are streaming away from the core at 6 million kilometers per hour. What makes this galaxy's cauldron bubble? Astronomers are exploring the possibility that the superbubble is formed by winds from massive stars. If so, these massive stars were likely born all at once as the galactic center underwent a sudden burst of star formation.