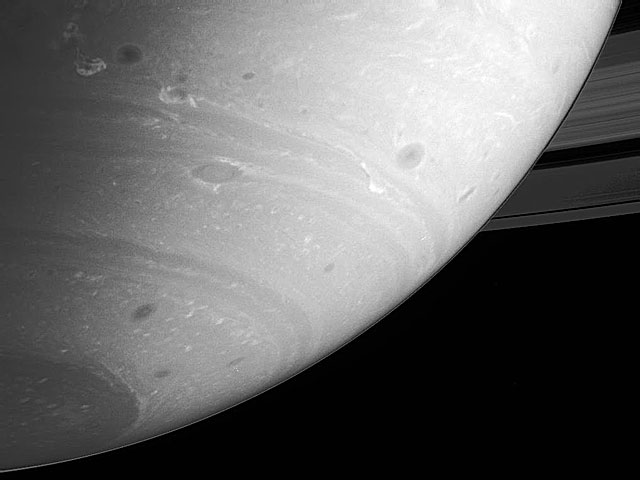 Explanation: What causes storms on Saturn? To help find out, scientists commanded the robot Cassini spacecraft now orbiting Saturn to inspect a circulating band of clouds nicknamed "Storm Alley." This westwardly moving cloud ring has been unusually active since the beginning of 2004, spawning white swirling storms and dark storms ringed by sprawling white clouds all cascading around the gas giant. The rogue band, as well as other parts of south Saturn, were imaged in stunning detail in a very specific band of infrared light that passes through Saturn's upper haze relatively unblurred. The result was then digitally sharpened, showing more cloud detail but creating fake image artifacts such as a surrounding ring. Speculation on the nature of past Saturn storms included convective motions of small amounts of ammonia and water, seasons, and shadowing effects of the great ring system. Although the above image provides data and clues, the power behind Saturn's storms still remains a mystery.