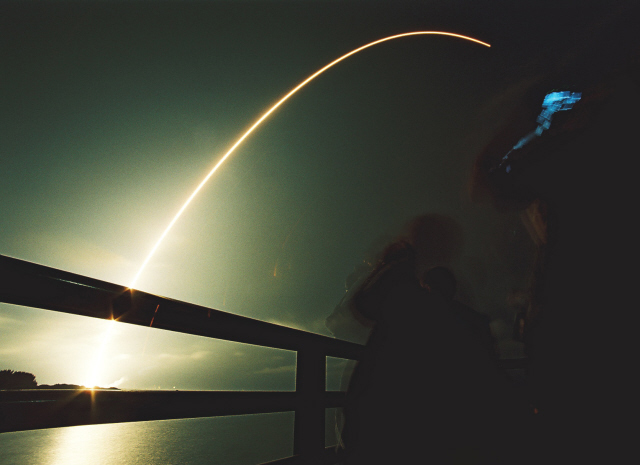 Explanation: Streaking into the early morning sky on August 3rd, a Delta II rocket launches NASA's Messenger spacecraft on an interplanetary voyage to Mercury. Scheduled to become the first probe to orbit Mercury, Messenger will begin by looping through the inner Solar System in a series of close flybys of planet Earth and Venus. The flybys are designed as trajectory changing gravity assist encounters to ultimately achieve the goal of orbiting Mercury in 2011. Prior to entering orbit, Messenger will also flyby Mercury in 2008 and 2009 as the first spacecraft to visit the Solar System's innermost planet since Mariner 10 in the mid 1970s. This dramatic view of the Messenger launch was recorded from a pier in Jetty Park at the north end of Cocoa Beach about 2.5 miles from the Cape Canaveral launch site. So what's that erratic blue streak on the right? It's the reflection from a camera blurred in the time exposure.