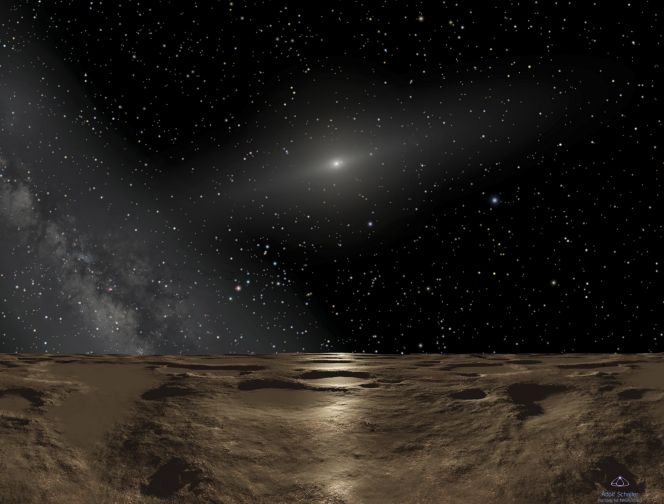 Explanation: Standing on Sedna - the solar system's most distant known planetoid - your view of the Sun at high noon might look something like this. An artist's dramatic vision, the picture shows the Sun suspended above the nearby horizon as a bright star immersed in the dusty ecliptic plane. Within the dust-scattered sunlight are more familiar members of the solar system, including planet Earth. But at a distance of about 13 billion kilometers (8 billion miles) Earth would only be visible in binoculars or a small telescope. In Sedna's dark, daytime skies, the noonday Sun is also joined by the faint stars and obscuring dust clouds of the Milky Way, suspended on the left above stark, ruddy terrain. For Sedna-based sky gazers, all planets have interior orbits and would remain close to the Sun in Sedna's skies. Of course, for earthbound astronomers, interior planets Venus and Mercury also remain near the Sun, with Venus scheduled for a rare crossing of the solar disc on June 8.