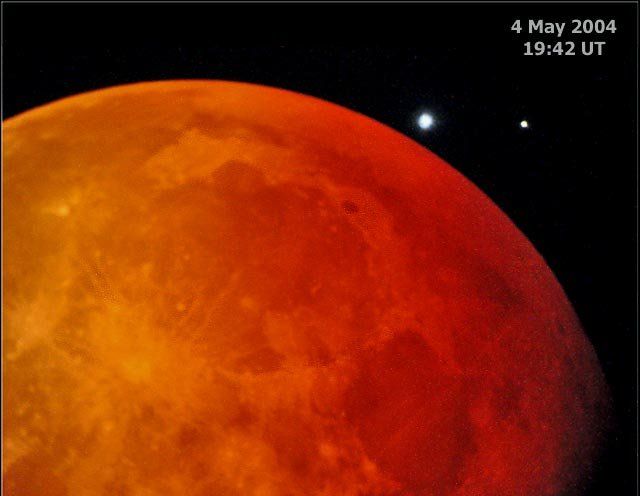 Explanation: Moderately bright Zubenelgenubi is the star just off the upper right hand limb of an eclipsed Moon in this telescopic view from Port Elizabeth, South Africa. Actually the second brightest star in the constellation Libra, Zubenelgenubi is fun to pronounce (try zoo-BEN-al-je-NEW-bee ...) and rewarding to spot in the night sky as it has a fainter companion star, seen here on the far right. Astronomer Francois du Toit reports that both stars were visible to the unaided eye on the night of May 4th, during the Moon's total eclipse phase. Orbiting a common center of gravity once every 200,000 years or so, the two stars are both larger and hotter than the Sun. About 77 light years away they are separated from each other by over 730 light hours -- about 140 times Pluto's average distance from the Sun. Zubenelgenubi was once considered the southern claw of the nearby arachnologically correct constellation Scorpius. What star was the northern claw? Zubeneschamali, of course.