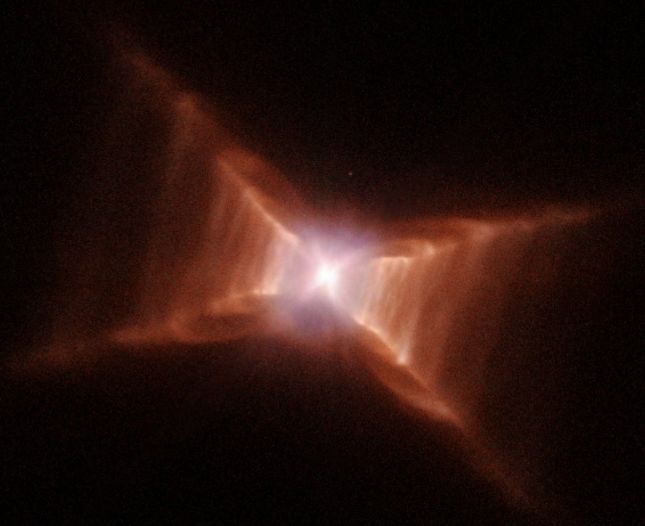 Explanation: A distinctive X-shape and ladder-like rungs appear in this Hubble Space Telescope image of the intriguing Red Rectangle Nebula. The dusty cosmic cloud was originally identified as a strong source of infrared radiation and is now believed to contain icy dust grains and hydrocarbon molecules formed in the cool outflow from an aging central star. So why does it look like a big X? A likely explanation is that the central star - actually a close pair of stars - is surrounded by a thick dust torus which pinches the otherwise spherical outflow into tip-touching cone shapes. Because we view the torus edge-on, the boundary edges of the cone shapes seem to form an X. The distinct rungs suggest the outflow occurs in fits and starts. About 2,300 light-years away toward the fanciful constellation Monoceros, the Red Rectangle nebula should be transformed into a glorious planetary nebula as its cool central star becomes a hot white dwarf over the next few thousand years. This sharp Hubble picture spans only about one third of a light-year at the distance of the Red Rectangle.