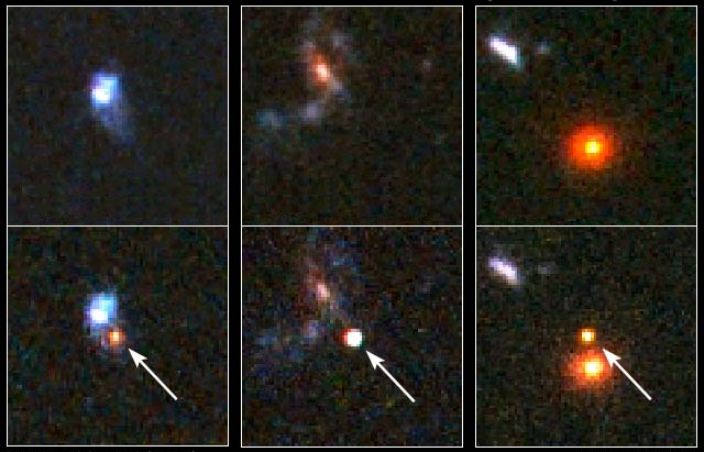 Explanation: Only a few short years ago, when the APOD editors were in graduate school, the pervasive, cosmic Dark Energy was not even seriously discussed. Of course, it now appears that this strange energy dominates the cosmos (as well as lectures on cosmology) and provides a repulsive force accelerating the large scale expansion of the Universe. In fact, recent brightness measurements of distant and therefore ancient, stellar explosions or supernovae indicate that the universal expansion began to speed up in earnest four to six billion years ago, when the Dark Energy's repulsive force began to overcome the attractive force of gravity over cosmic distances. The Hubble Space telescope images above show a sample of the distant supernova explosions, billions of light-years away, in before (top) and after (bottom) pictures of their faint host galaxies. Hubble measured supernovae also hint that the Dark Energy's repulsive force is constant over cosmic time and so could be consistent with Einstein's original theory of gravitation. If the force actually changes with time, the Universe could still end in a Big Crunch or a Big Rip ... but not for at least an estimated 30 billion years.