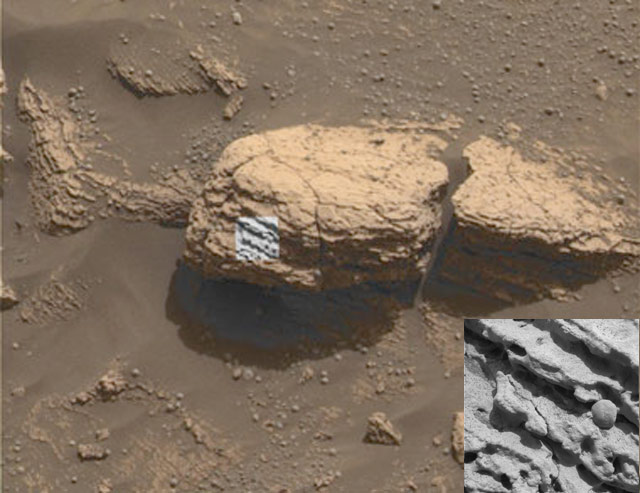 Explanation: What are those unusual spherules on Mars? The Mars Opportunity rover has now photographed several unusual nodules on Mars that have a nearly spherical shape. Many times these spherules are embedded in larger rock outcroppings but appear grayer. Pictured in the inset is one such spherule embedded in a rock dubbed Stone Mountain, visible to the Opportunity rover now rolling inside a small crater on Meridiani Planum. Opportunity was directed to go right up to Stone Mountain to get a better look. The inset picture spans only 3 centimeters across, revealing the rock to be named more for shape than actual size. Scientists are currently debating the origin of the spherules. One leading hypothesis holds that the beads were once-molten rock that froze in mid-air after an impact or a volcanic eruption. Another hypothesis holds that the spherules are concretions, hard rock that slowly accumulates around a central core. Opportunity will work to solve this mystery and others over the next few days.