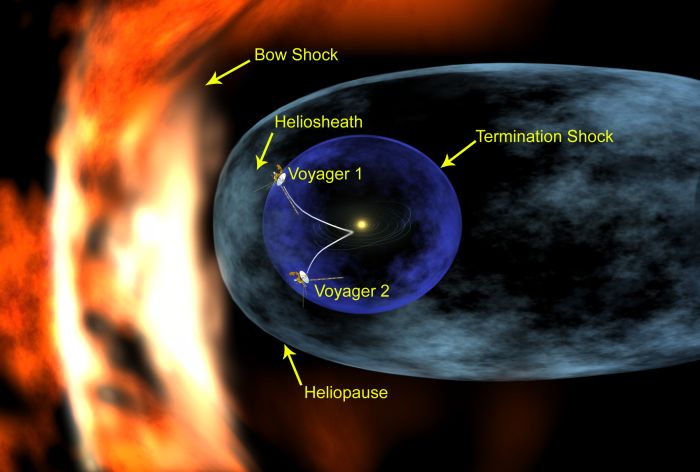 Explanation: Launched in 1977, Voyager 1 is now about 12 light-hours or 90 astronomical units (AU) from the Sun, making this spacecraft humanity's most distant ambassador to the cosmos. Well beyond the orbits of the outer planets, Voyager 1 is believed to be entering the realm of deep space near the edge of the heliosphere, the region dominated by the solar wind and magnetic field. Causing some debate, new results from instruments still operating have given indications that the spacecraft could finally be encountering a fluctuating boundary known as the solar wind's termination shock. Illustrated above, the bubble-shaped termination shock is produced when the wind from the Sun slows dramatically and piles up as it runs in to the tenuous interstellar gas. Still farther out, beyond the heliopause, solar wind and interstellar gas begin to mix, while the heliosphere's motion through interstellar space creates a bow shock, analogous to a boat moving through water. Estimates are that both Voyager 1 and 2 have enough power and fuel to operate until about the year 2020. The spacecraft continue to coast toward interstellar space at over 3 AU per year.