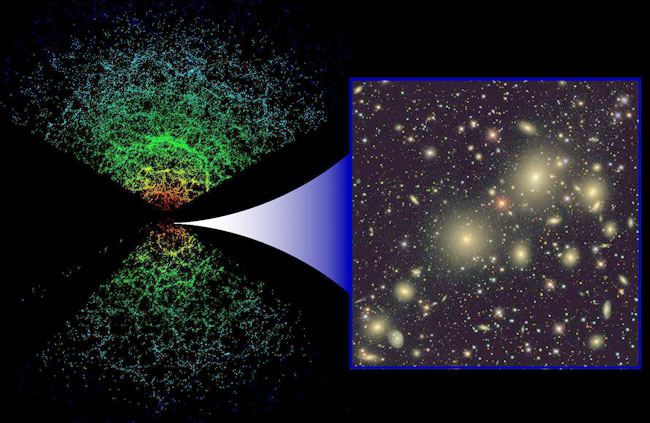 Explanation: The latest map of the cosmos again indicates that dark matter and dark energy dominate our universe. The Sloan Digital Sky Survey (SDSS) is on its way to measuring the distances to over one million galaxies. Galaxies first identified on 2D images, like the one shown above on the right, have their distances measured to create the 3D map. The SDSS currently reports 3D information for over 200,000 galaxies, now rivaling the 3D galaxy-count of the Two-Degree Field sky map. The latest SDSS map, shown above on the left, could only show the galaxy distribution it does if the universe was composed and evolved a certain way. After trying to match many candidate universes to it, the Cinderella universe that best fits the above map has 5% atoms, 25% dark matter, and 70% dark energy. Such a universe was previously postulated because its rapid recent expansion can explain why distant supernovas are so dim, and its early evolution can explain the spot distribution on the very distant cosmic microwave background.