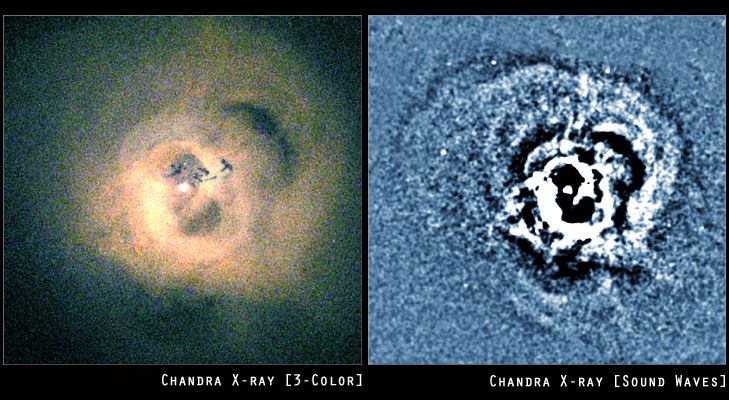 Explanation: A truly enormous collection of thousands of galaxies, the Perseus Cluster - like other large galaxy clusters - is filled with hot, x-ray emitting gas. The x-ray hot gas (not the individual galaxies) appears in the left panel above, a false color image from the Chandra Observatory. The bright central source flanked by two dark cavities is the cluster's supermassive black hole. At right, the panel shows the x-ray image data specially processed to enhance contrasts and reveals a strikingly regular pattern of pressure waves rippling through the hot gas. In other words, sound waves, likely generated by bursts of activity from the black hole, are ringing through the Perseus Galaxy Cluster. Astronomers infer that these previously unknown sound waves are a source of energy which keeps the cluster gas so hot. So what note is the Perseus Cluster playing? Estimates of the distance between the wave peaks and sound speed in the cluster gas suggests the cosmic note is about 57 octaves below B-flat above middle C.