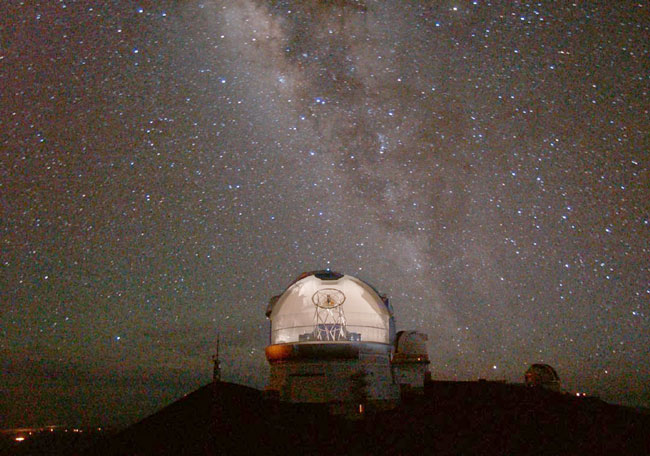 Explanation: Where will Gemini take us tonight? It is dusk and Gemini North, one of the largest telescopes on planet Earth, prepares to peer into the distant universe. Gemini's flexible 8.1-mirror has taken already effectively taken humanity to distant stars, nebulas, galaxies, and quasars, telling us about the geometry, composition, and evolution of our universe. The above picture is actually a composite of over 40 images taken while the Gemini dome rotated, later adding an image of the star field taken from the same location. The Gemini dome is not transparent -- it only appears so because it rotated during the exposures of this image. The constellations of Scorpius and Sagittarius can be seen above the dome, as well as the sweeping band of our Milky Way Galaxy, including the direction toward the Galactic center. Gemini North's twin, Gemini South, resides in Cerro Pachn, Chile. This night, 2003 August 19, Gemini North took us only into the outer Solar System, observing Pluto in an effort to better determine the composition of its thin atmosphere.