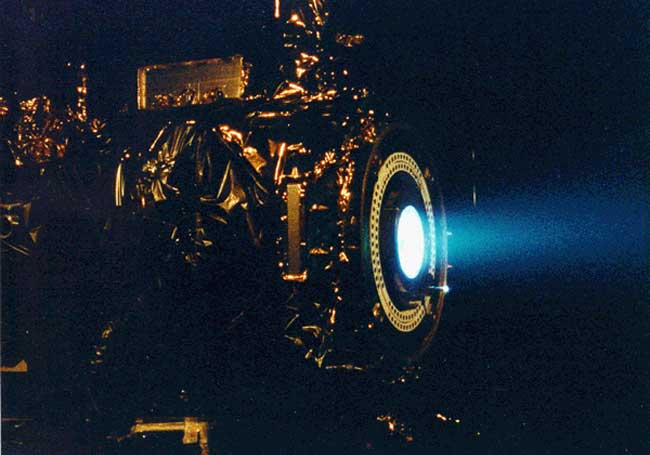 Explanation: Space travel entered the age of the ion drive in 1998 with the launch of Deep Space 1, a NASA mission designed primarily to test new technologies. Although the ion drive on Deep Space 1 provided acceleration much smaller than we feel toward Earth, it gradually gave the spacecraft the speed it needed to travel across our Solar System. The propulsion drive worked by ionizing xenon atoms with power provided by large panels that collect sunlight. As these ions were expelled by a strong electric field out the back, the spacecraft slowly gained speed. Pictured above, hot blue ions emerge from a prototype drive that was successfully tested at JPL in 1997. Deep Space 1 successfully zoomed past asteroid 9969 Braille in July 1999 and then Comet Borrelly in September 2001, then obtaining the most detailed photograph ever taken of a comet nucleus. The spacecraft was retired in December 2001