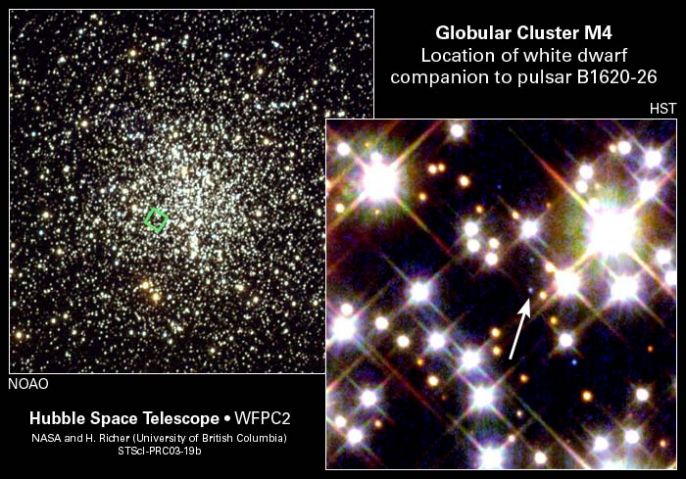 Explanation: A planet, a white dwarf, and a neutron star orbit each other in the giant globular star cluster M4, some 5,600 light-years away. The most visible member of the trio is the white dwarf star, indicated above in an image from the Hubble Space Telescope, while the neutron star is detected at radio frequencies as a pulsar. A third body was known to be present in the pulsar/white dwarf system and a detailed analysis of the Hubble data has indicated it is indeed a planet with about 2.5 times the mass of Jupiter. In such a system, the planet is likely to be about 13 billion years old. Compared to our solar system's tender 4.5 billion years and other identified planets of nearby stars, this truly ancient world is by far the oldest planet known, almost as old as the Universe itself. Its discovery as part of an evolved cosmic trio suggests that planet formation spans the age of the Universe and that this newly discovered planet is likely only one of many formed in the crowded environs of globular star clusters.