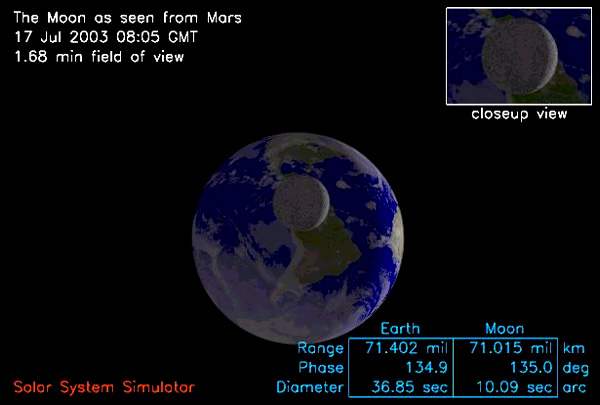 Explanation: When earthdweller Patrick Vantuyne wondered what his home planet's single large moon would look like if viewed from Mars on July 17, he availed himself of the JPL Solar System Simulator. Of course, when viewed from Earth on that date (tomorrow), the gibbous Moon will pass tantalizingly close to Mars for observers in North, Central, and South America and will actually pass in front of (occult) the Red Planet for some locations, including much of Florida. Vantuyne's efforts were rewarded with this remarkable simulated view of the crescent Moon against the background of a darkened Earth. From the martian vantage point, the lunar orb is seen just below the tip of the Florida peninsula at 8:05 GMT. Observers on planet Earth who want to watch the corresponding Moon/Mars show in tomorrow's predawn sky should note the viewing times for selected cities.