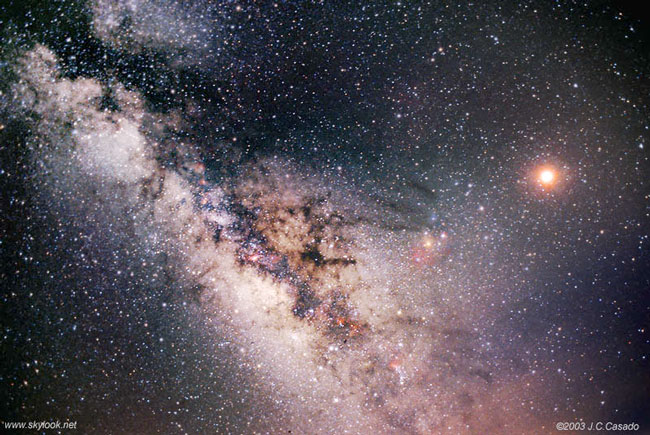 Explanation: What's behind the Moon? Each month, our Moon passes in front of -- and outshines -- many an interesting star field. Exceptions occur during a new Moon and during a total eclipse. In the background of a new Moon is usually the Sun, an even brighter orb that even more easily outshines everything behind it, except during a total solar eclipse. Even the longest total solar eclipse lasts just a few minutes, while the Sun's corona still remains bright. During a total lunar eclipse, however, the full Moon dims and a majestic star field may present itself for an hour or more. Such was the case during the middle of last month, when a rare glimpse of an eclipsed Moon superposed in front of the disk of our home Milky Way Galaxy was captured. Although fully in the Earth's shadow, the eclipsed Moon is still the brightest object on the right. The above image was captured during sub-zero weather from the Teide 2003 expedition to Mirador del Pico Viejo, a mountain in the Canary Islands, Spain, off the northwest coast of Africa.