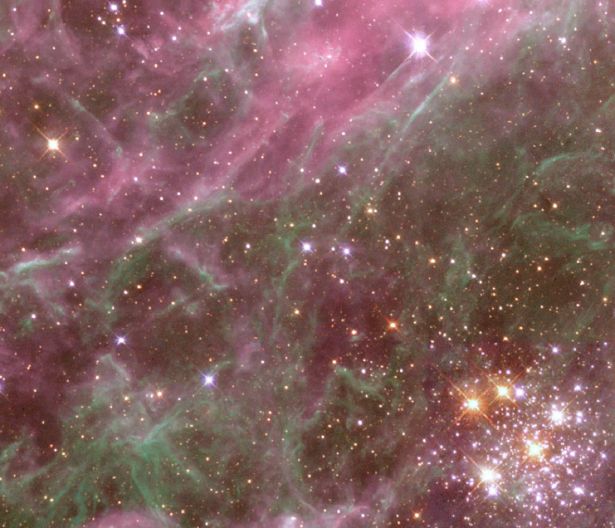 Explanation: The star cluster at lower right, cataloged as Hodge 301, is a denizen of the Tarantula Nebula. An evocative nebula in the southern sky, the sprawling cosmic Tarantula is an energetic star forming region some 168,000 light-years distant in our neighboring galaxy the Large Magellanic Cloud. The stars within Hodge 301 formed together tens of millions of years ago and as the massive ones quickly exhaust their nuclear fuel they explode. In fact, the giant stars of Hodge 301 are rapidly approaching this violent final phase of stellar evolution - known as a supernova. These supernova blasts send material and shock waves back into the nebular gas to create the Tarantula's glowing filaments also visible in this Hubble Space Telescope Heritage image. But these spectacular stellar death explosions signal star birth as well, as the blast waves condense gas and dust to ultimately form the next generation of stars inside the Tarantula Nebula.