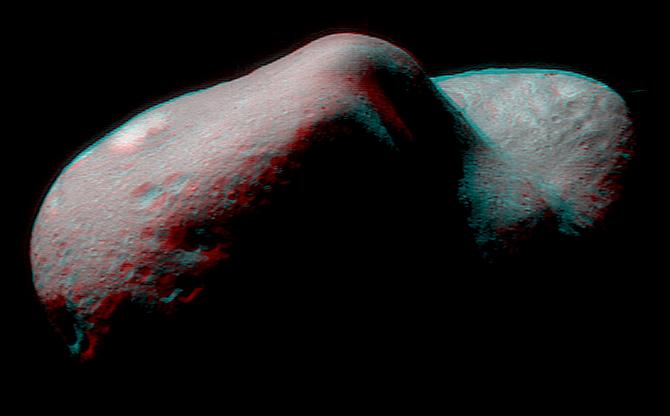 Explanation: Get out your red/blue glasses and float next to asteroid 433 Eros, 170 million kilometers away! Orbiting the Sun once every 1.8 earth-years, asteroid Eros is a diminutive 40 x 14 x 14 kilometer world of undulating horizons, craters, boulders and valleys. Its unsettling scale and bizarre shape are emphasized in this picture - a mosaic of images from the NEAR Shoemaker spacecraft processed to yield a stereo anaglyphic view. Along with dramatic chiaroscuro, NEAR's 3-D imaging provided important measurements of the asteroid's landforms and structures, and clues to the origin of this city-sized chunk of solar system. The smallest features visible here are about 30 meters across. After spending a year in orbit around Eros, the historic Near Shoemaker spacecraft made the first ever landing on an asteroid's surface February 12, 2001.